A Visit to Barnes & Noble

"What's Eating Your Child? was not officially scheduled to come out until June but my friend Lynn reported it was at Barnes & Nobel's already so I had to go take a picture. 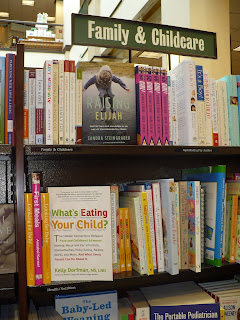 Blog #33 The Case of the Passing Wind

Forty three year old Carrie sat down and frowned with concentration. “How can I help?” I asked.

“I am a little uncomfortable talking about this,” she hedged looking down at her lap.

“Take your time and start with what you are comfortable with,” I suggested.

Slowly, her story unfolded. Her health was excellent, in general and she did her best to “stay away from doctors”. Her main strategies for avoiding the medical profession were to eat well, exercise and generally take care of herself.

“I am pretty boring,” she confessed. “I don’t drink or smoke. Not even coffee.”

Carrie fidgeted but continued her story. She was not one of those people who liked to complain about the little physical quirks of life, she explained. Her mother-in-law talked about her bowels like she was reporting on the weather, which Carrie thought was disgusting. Where she grew up, this was considered uncouth.

Now Carrie found herself in the embarrassing situation of having developed a sudden problem with her bowels. “Maybe I have no patience for the bowel report because mine have always been perfect,” she says with self-depreciation.

She had not changed her diet or habits but for the last month or so she had developed horrific flatulence. “I could burn a hole in the upholstery,” she laughed nervously, her face turning red.

I laughed with her and agreed that would be cause for concern then asked some questions.

Had she been traveling?
Yes, but only a short business trip. She took these several times a year.

Had she been sick? No.

Any history of bowel issues? None. Her bowels had always been reliable.

Had her bowel movements changed, too? Absolutely. They were now more frequent, mostly loose and “clear the room” stinky. Before they were well formed and regular.

I looked at her diet and was happily surprised to find lots of fresh fruits and vegetables. “As much organic as I can get,” she insisted. She avoided dairy products because they did not agree with her. There was little processed food and her weight was good.

Gas is the product of fermentation. The bowels have plenty of partially digested food slug to ferment and the bacteria to do the job. If there are enough of the right kind of good bacteria, there is clean processing and minimum bad gas production. But, if the wrong bacteria and/or excessive yeast get to the food they form all types of gas. One species of bad bacteria, for example, thrives on sulfur and produces methane gas. High levels of methane gas produced by people (and more famously, cows) are thought to be a contributing factor to global climate change. So, reducing personal emissions is another way to go “green”.

Clearly, Carrie had picked up or for other reasons was growing too many unhelpful bacteria. The questions were, which one and why were they growing so well? The most accurate way to measure what is growing in the gut is to have a good lab culture the stool. The test I like also looks at other factors such as digestive enzyme activity and has a marker for general gut immune function. This costs about $200.

After hearing my explanation Carrie was quiet for a minute. “My husband is about to change jobs,” she started hesitantly. “Is there any cheaper way to deal with this?”

I told her we could try to overrun the bad bacteria with good bacteria and then to be sure, we could give her some gut immune support. If the problem was a simple imbalance in an otherwise healthy system a few ecological shifts should make her right as rain. But if she was not better in 2 weeks, we could run the stool test. “That would be great,” she enthused.

The plan was laid out. She would take probiotics (good bacteria) twice per day. I recommended a brand containing 20 billion bugs per capsule that required refrigeration. Then I suggested a gut immune support supplement called Probioplex (2 twice per day).

“The gas may get a little worse for a few days, due to ‘die off’,” I explained. As the bad bacteria “die off” they release toxins which can smell bad and be absorbed into the blood. “But, if it is a simple problem, the system should settle down within a week. If not give me a buzz.”

“Either that or I will have to invest in an industrial grade air purifier and carry it with me everywhere,” Carrie quipped.

Carrie agreed to leave me a message in two weeks. She would report that all was well or request I send her a stool test kit. Two weeks passed and I was going through my e-mails when I saw her name. I clicked on.

“Furniture upholstery is safe and my husband loves you,” it read.

I guess the plan worked.
Posted by Kelly Dorfman at 7:17 AM No comments:

Blog #32 The Other War on Drugs

I think we might be losing the other war on drugs. More and more kids are being diagnosed with Attention Deficit Hyperactivity Disorder (ADHD) and put on stimulants to tolerate an increasing crazy education system and I have become less and less effective at talking parents out of it.

“It is normal for little boys to explore the world through motion,” I will insist.

“But the psychologist said his self esteem will suffer if I don’t help him with medicine,” the parents will counter.

Calling this situation the other war on drugs is not strictly accurate as it is more of a siege with growing numbers of parents ignoring their instincts and succumbing to the pressure to medicate.

The problem is that nutrition, cognitive and other approaches to support brain function work over a long time while stimulants or ‘speed’ work right away. Work how? That is not entirely clear, but stimulants do increase the speed of brain waves and distractibility is linked to excessive slow wave activity.

The brain has different types of electrical wave activity depending on what you are doing. When you are sleeping, for example, there is mostly slow delta wave activity. Concentrate on a calculus problem and there is more alpha activity. Theta waves are associated with semi-conscious, dreamy states such as when you first wake up. They are the next level of activity above delta sleep waves.

Drugs like cocaine and stimulates “speed” up wave activity shifting theta waves to an alpha or beta level. How can kids who are hyperactive have more dreamy waves? One theory is that they have to keep moving to compensate and concentrate. Here is the sticky point- all children have mostly theta wave activity until they are 6 or 7. This dreamy, unfocused state is normal developmentally. So when Molly or Erin or Stacey are pulling their hair out trying to decide if their 5, 6 or 7 year olds should take stimulant medicine because the school is saying their children might have ADHD, I know something is wrong with this picture.

No single human being should be asked to teach a class of twenty seven 6 year olds. It is not possible to do this successfully unless you drug into submission a big hunk of them. They developmentally are not ready to focus.

And it gets even kookier. One of the main diagnostic criteria for ADHD is the ability to concentrate on things that are not interesting to you. The part of the brain thought to be responsible for this function is the prefrontal cortex. Prefrontal cortex (PFC) dysfunction is blamed for ADHD symptoms but the PFC is the last part of the brain to develop. It is not fully operational until age 18 to 22. (Earlier for girls but on the later side for boys.)

The PFC gives you perspective and allows you to do the hard things. A well functioning PFC allows you to wait your turn when you would rather not and recognize the last time you ate two donuts for breakfast you felt lousy all day so you better not do that again. Heck, it is why adults can do their taxes even though they are extremely boring.

It is not suppose to be working very well at age nine or fourteen. Part of the cause of teenage impulse control problems is that their immature PFC does not allow them to truly calculate the results of their actions ahead of time. Kids are not supposed to be little adults.

But who has time to respect or wait for development? We need kids to behave in overcrowded, movement restrictive classrooms now. And the studies show this is exactly what stimulants can do for us.

Most parents think giving their children stimulates will help with academic success and improve self esteem but what they really do is work as a classroom management tool. The few studies done looking at long term use of stimulates found they do not improve standardized test scores but they help kids sit better, at least temporarily. Over many months any perceived changes appear to level off.

Teachers cannot be blamed because they are trying to help kids in a system that does not respect learning differences or even child development. Parents are told that if only their child could concentrate, they would learn. I contend that if only they could learn, they would concentrate. Unfortunately, the education system is broken and we are not going to medicate it into health. But, don’t take my word for it. Before making any decisions, check out this spectacular video by Sir Ken Robinson: http://www.youtube.com/watch?v=zDZFcDGpL4U
His explanation is spot on and his accent makes everything sound better.
Posted by Kelly Dorfman at 7:21 AM 3 comments:

My book is printed and sitting in the warehouse ready to ship! Wahoo. I am so excited.
Here it is: 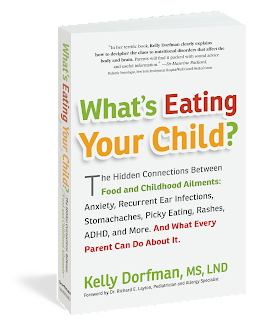 It can be preordered at a discount from Amazon or Barnes & Noble.
Posted by Kelly Dorfman at 6:50 AM 1 comment:

Kelly Dorfman
My name is Dorfman: Kelly Dorfman and I am a nutrition detective. When medical doctors and specialists are out of ideas about a health issue, I get the call. “What the heck?” they figure at that point, “maybe there is a nutrition link”. It cannot hurt and I am pretty clever for a short, middle age woman. Thirty years experience, a scientific mind and well developed intuition helps. And since the internet, I don’t even have to haunt the national medical library anymore. People call me from all over the country for advice and as a result, my professional life is more fascinating than most. The stories are actually true which makes reading this better than watching reality TV. The names have been changed to protect the malnourished. And as always, nothing in this blog should be construed as medical advice. TALK TO A QUALIFIED HEALTH PROFESSIONAL IF YOU HAVE ANY QUESTIONS REGARDING YOUR HEALTH. On June 6, Workman Press is publishing my book, "What's Eating Your Child? The hidden connections between food and childhood ailments." It is a book about how to be a nutrition detective with your own kids. Welcome to Nutrition Detective NSI (Nutrition Scene Investigation).....